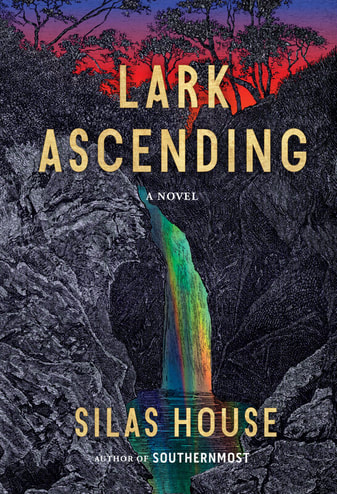 A riveting story of survival and hope, set in the not-too-distant future, about a young man forced to flee the United States and seek refuge across the Atlantic.

As fires devastate most of the United States, Lark and his family secure a
place on a refugee boat headed to Ireland, the last country not yet overrun by extremists and rumored to be accepting American refugees. But Lark is the only one to survive the trip, and once ashore, he doesn't find the safe haven he'd hoped for. As he runs for his life, Lark finds an abandoned dog who becomes his closest companion, and then a woman in search of her lost son. Together they form a makeshift family and attempt to reach Glendalough, a place they believe will offer protection. But can any community provide the safety that they seek?

For readers of novels such as Station Eleven, The Dog Stars, and Migrations, Lark Ascending is a moving and unforgettable story of friendship, family, and healing.

“In Lark Ascending, Silas House casts an irresistible spell, conjuring a near future that is both familiar and unbearable, illuminating the brutality and suffering that our own thoughtless age seems determined to invoke. But Lark Ascending is not merely, or even mainly, a tale of pain and grief. This beautiful book is shot through with such tenderness and humanity, such love and courage and beauty and hope, that it feels almost like a prayer.”
—Margaret Renkl, author of Late Migrations

“A dystopian classic, finding new notes of peril and possibility in the once-and-future homeland of Ireland and giving us the kind of richly observed alternative family that humanity of any era would call savior. It also has the best dog ever, excepting my own. Don’t miss this one.”
—Louis Bayard, author of Jackie and Me

“Silas House has always served as an ancestor from the past who has stepped into the present with rich lessons in tow. But with Lark Ascending House reveals himself to be an oracle from the future who has come back to illuminate our lived moment with a snapshot of what the years ahead could hold. The vision is terrifying and spare, but in House’s capable and delicate telling, it is also beautiful and compelling. Lark Ascending marks a stunning turn in House’s career, taking him from the Appalachian Mountains to a post-apocalyptic Atlantic crossing, but I have no doubt that readers will follow Silas House wherever he goes, whether into the past or headlong into the future.”
—Wiley Cash, New York Times bestselling author of When Ghosts Come Home

“I was sucked into this urgent story where survival in the not-too-distant future depends on forging connections with strangers and nurturing tenderness and hope within. An essential, heartbreaking but ultimately uplifting read.”
—Michelle Gallen, author of Factory Girls and Big Girl, Small Town

“With Lark Ascending, the gifted Silas House has, with the most deft and masterful touches, forged a quite terrifying and all-too-plausible glimpse of our near future and somehow imbued it with almost impossible quantities of poetry and humanity. A gripping story of endurance, suffering and loss, but also of overwhelming love, loyalty and hope, the result is a hugely impressive feat of the imagination . . . A beautiful, haunting piece of work, and a compulsive read.”
—Billy O'Callaghan, author of Life Sentences and The Dead House